I am indeed becoming a bit of an Inspector Singh junkie, having just polished off the third in the series in the space of a week.

And books 4-6 are downloaded and ready to go.

In the third book in the series, Inspector Singh is on home turf, trying to find out who murdered a lawyer in a big international law firm.  Questioning highly trained lawyers was never going to be a cake walk and the good Inspector finds himself tackling a wall of corporate solidarity.  But, as he soon discovers, his irritating orders to investigate in the lawyers’ offices rather than at police HQ, to try and keep the press off the trail, does have some unexpected benefits: 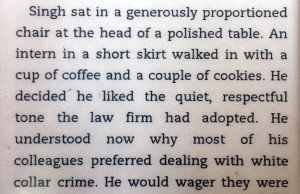 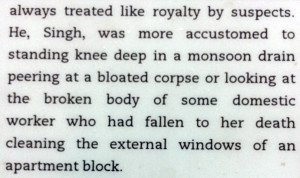 Unlike the first two books in the series, where the overweight, chain-smoking, beer-loving detective was working overseas, first in Malaysia and then in Indonesia, in “The Singapore School of Villainy ” we get to see Inspector Singh in his home environment. And that means we finally get to meet Mrs. Singh, a woman who is very concerned about her reputation within the Singaporean Sikh community.  Since one of the lawyers who may be a possible suspect is not only a young unmarried Sikh boy, but also one to whom she is very, very distantly related, it is especially galling that her husband is seemingly unable to nail the culprit, when all the world and its wife and the local press and her sisters knows who has done it. (The wife.  Or the second wife. Open and shut case.)

Here Mrs. Singh defends the young Sikh man she doesn’t know –  but he is a Sikh, and is very very distant family, from India : 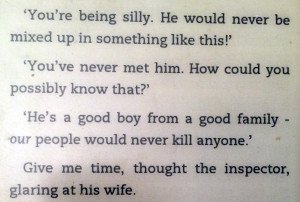 As in the previous two novels, Inspector Singh has a sidekick appointed to work with him – and cleverly, this is never the same person –  and it is always someone who is initially very uncomfortable around his unorthodox way of working.  And this being Singapore, the young local policeman seconded to this murder investigation is beyond nervous at his boss’s unconventional approach and what it might do to his own shiny-new career prospects.

For this is, after all, Singapore, a place where there are relatively few murders, and hardly ever a high profile one. 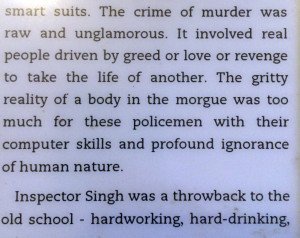 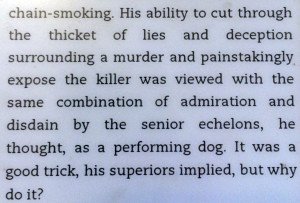 Singh, too, initially despairs of Corporal Fong, who keeps jumping to attention and is terrified of putting a foot wrong. 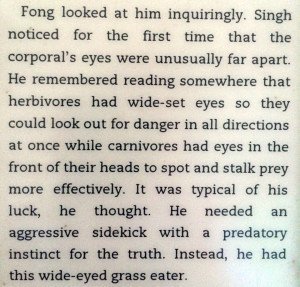 Ms Flint is, as ever, spot-on-perfect with he characterisation of the Chinese, the ex-pats, the Indians and the Filipinas who people this whodunnit.

One suspects that she doesn’t have much time for the entitled culture of European ex-pats.

Or perhaps it is just the portly Inspector Singh who doesn’t: 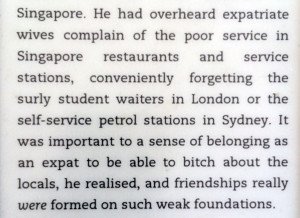 Ms Flint’s description of the hefty Singh sisters is oh-so-accurate: 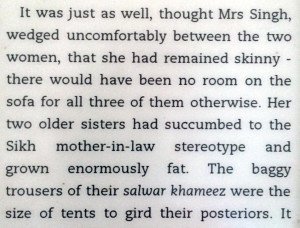 I live in India, in New Delhi, so the baggy-trousered matrons ring true, as do the flappy arms:

This third novel in the series brings us closer to understanding Inspector Singh the man, as opposed to Inspector Singh the cheerfully rule-bending policeman who irritates the living daylights out of his superiors.  We see him, for example, in the presence of his wife, and sprawled in his comfy chair at home, and in this book, on his home turf, he seems to be more personally concerned about some of his suspects.  The end of the novel is bleaker and darker and more moving than anything we have seen of Inspector Singh thus far.  He becomes a more rounded character in this book (no pun intended), moving beyond his fat wheezy persona to a man with deep emotions, and he is all the more endearing for it.

But nevertheless, Singh the slightly ridiculous caricatural character (and fully aware of his own image) is as funny as ever: 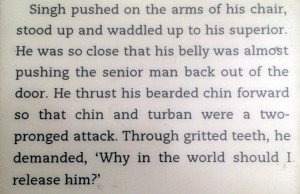 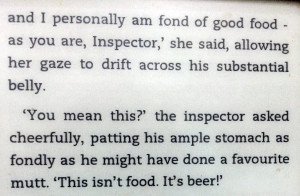 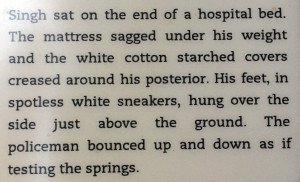 He is nobody’s fool, and is realistic enough to know that he is a square peg in a round hole – an unorthodox Indian cop in an orderly Chinese set up: 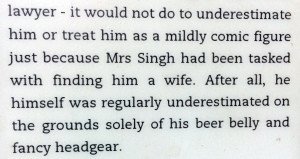 Anyway, that’s enough from me.  I’m worried that if I share any more thoughts with you I may inadvertently spoil the plot, which is – as ever – a cracker, keeping you guessing until the last chapter.  Actually, if I can boast a wee bit, I sort-of-guessed who the murder might be, but, like the good Inspector, didn’t want it to be true.

Go on, order the book right now.  You won’t regret it.  And if you want to order Book 1 and Book 2, just click on the relevant links.

Tell you, gotta love the internet and this whole global village vibe.

Here is the tale of an online comment from a South African friend in Cape Town, about a book I reviewed, sitting here in Delhi, about Shanghai (you are following me here?) in which she recommended Shamini Flint’s books about a Singaporean detective.  After reading just the first book, I am already a loyal fan.  Books 2 and 3 already downloaded and ready to go.

Inspector Singh is going to be a great character, and a hugely likeable one at that. I just know it.

A middle aged, overweight Singaporean Sikh, we meet him at Changi Airport, waiting to fly to Malaysia, where he has been sent to work on a case that sounds distinctly like a poisoned chalice.

Alan Lee, a wealthy Malaysian tycoon has been shot, and his estranged Singaporean wife, with whom he was locked in a bitter religious-based custody battle, has been arrested for his murder.  And that is why Inspector Singh is in Kuala Lumpur. To try and find who murdered Alan Lee and to try and protect the interests of his fellow citizen, Chelsea Liew.

Inspector Singh is fully aware that he is regarded as an oddity in the Singapore police force – he knows he is considered as the unofficial “most likely to be forced into early retirement” candidate.  And this tricky, convoluted case, which has all of Malaysia and Singapore gripped by its high-voltage drama and religious implications, is his, and his alone, to solve.

Just look at Inspector Singh for a moment.

He is a smoker in Singapore, of all nanny states to live in.

He wears white sneakers instead of sensible black shoes.

He has (possibly) too many pens in his shirt pocket.

He eats too much, he smokes too much, and he really can’t be bothered with excessive procedure.

He is a guts feel copper of the old school, and only wants to get results – arrest the murderer – regardless of political fallout and considerations.

As I said, hugely likeable and an instantly great character.

Ms Flint is a confident and eloquent storyteller, and shines lights on many aspects of Malaysia, as only an insider can.  Religion, for one, and the frightening ramifications it can have for a family.  The environment –  the brutal deforestation of Borneo is a very palpable presence in this murder investigation.  The author highlights cultural nuances and differences with a consummate light hand.

Inspector Singh –  a Sikh, of Indian origin –  is wearily aware of global ignorance about dark men in turbans.

Chelsea Liew, caught up in a from-beyond-the-grave tale of horrors, develops before our very eyes from a resigned monosyllabic hostile victim to a woman of huge courage, whom we cheer for all the way – well I did, and as for the final glimpse we have of her…Don’t worry, no plot-spoiler here, but our final moments with Chelsea are heart-stopping and gripping, that’s all I’ll say.

Read this great book for a thoroughly enjoyable whodunnit, as well as for a portrait of a country and her people.

If you feel like buying the book after reading the review, it couldn’t be easier.  Simply click on the links below:

Does a reviewer have a moral obligation to finish a book ?

If so, then this review must carry a caveat.  Half way through, mired down by too much information, and  too heavy a writing style, this reviewer abandoned “Besieged”.

The writer has done a hugely impressive job of tracking down and translating hitherto unseen papers from the First Indian War of Independence/Indian Mutiny of 1857.  He has read, translated, catalogued and shared with his reader thousands of letters and fragments of correspondence written by the many people caught up on the side-lines of the epic struggle of the colonial British for domination in India.

There are requests for money for troops, complaints from the very same troops about unpaid wages.  There are requistion orders, legal hassles, reports of blocked drains – no detail of the minutiae of Delhi life in the turbulent days of 1857 is too small to be excluded.

Wherein lies one of the flaws of this impressive scholarly work.  There is almost too much information, and since it is arranged by theme, after a while it gets – sad to say – a wee bit “same -y”.

It is all to easy to be an armchair expert, but this body of material is just crying out to be a novel.

The clichéd “cast of thousands” is already assembled here – administrators, prostitutes, coolies, butchers, the King, beggars, and the delightfully monnikered “loiterers”.  British, Hindu, Sikh, Muslim – all these voices are present, clamouring for attention.

Free all these grumbling, loud, confrontational voices from their strict thematically arranged categories. Jumble them all up. And let the noisy, chaotic story of life in Delhi, on the sidelines of history, emerge.  That, in this reviewer’s opinion, will make a truly marvellous book.

Besieged Voices from Delhi 1857 by Mahmood Farooqui is published by Penguin Viking.  Published in 2010.

The hardback sells in India for Rs 699.