Stretched out on my sofa, nursing a very painful torn meniscus that has seen me pull out of 2 marathons and one half marathon this winter season, guess what I’m reading?

One of my Christmas presents from my sister.

”Fifty places to run before you die.”

Talk about rubbing salt into the wound!

The text and photos of the 50 places to run – many of them in the US, but sadly none in India (where I live) – are enticing, to put it mildly.

There are temptations a plenty for an older runner like myself, who came to running late in life and is desperate to see/do/run/enjoy as much as possible – pause to curse the dratted torn meniscus…

Expert runners and athletes have picked their favourite places to run, and so they describe the courses with insider knowledge and affection. Many categories of runs are covered – marathons, ultras, 10ks and simple scenic trails. Since I want to start trail running, those are the photos over which I have lingered the most, just wishing I were fit enough to run in beautiful mountainous terrain.

This is a collective work, and each chapter ends with an “If you go” section, that includes tips on when to go, where to stay, and gives links to the race websites.

Personal favourites in the book, that made me dream the most?

The Big Five Marathon in our beloved South Africa.

The Antarctica Marathon – just because.

The Wall Marathon in China.

Such a great gift, and one that will keep me dreaming for as long as I’m fit enough to lace up my running shoes.

A shiny new year is as good as any time to dream and plan exciting adventures, so why not get hold of this lovely-looking book and set your 2020 goals?

Here’s the link, below, to order the book:

You don’t really need the backstory, I hope, to appreciate this review, but since it might just put things fully in context, here you go.

Through the twin worlds of Facebook and running, I recently met the utterly charming Chetan Mahajan, author of “The Bad Boys of Bokaro Jail”. Having chatted (all too briefly) with Chetan, reading his book in 2 long greedy sessions was even more interesting, for this book is his prison diary.  Yes, you read that correctly.  A prison diary.

Just before the recent Airtel Delhi Half Marathon, Chetan posted on a running page I follow on Facebook that he had T shirts to give away, and mentioned that he had run a lot whilst in prison. With such an interesting post, obviously I googled him, and discovered that this well educated, urbane man had been wrongly fully arrested on Christmas Eve 2012, spent a month in jail in Jharkhand, before being released and exonerated of all charges. Thank goodness for us, he kept notes and wrote a prison diary, and it makes for fascinating reading.  It is almost certainly the only good thing to come out of his horrific experience.  He writes from the heart, and doesn’t hide his fear at being jailed, his utter disbelief that this was happening to him, and his expectation that he would be out within a day or so…which stretches to a week…to a month.

When I met Chetan, he was measured and pragmatic about his experience, saying that he had decided the only way to deal with it was to move on, and that writing this book had helped. I can fully see why, because in it he details not only his own fears and thoughts, his own highs and lows, but also talks a lot about prison life and routine, about the men he met in jail, as well as his thoughts on the Indian justice system. What you have to remember all the way through this book, is that Chetan, along with all the other men, is an under-trial. Someone not yet found guilty. And yet there are men inside who have served way beyond their time. Or what would have been their time, had their cases ever been heard.

Chetan is lucky. He has a dynamic father who rushes to be with him, he has his brother, his brother in law and his wife, who visit, and use their influence as educated, urban, well connected people, to ensure that his life is as comfortable as it can be in a cell. Pity the many men he meets inside who are too poor, or illiterate, and therefore by inference not connected to anyone at all.  They languish in jail, unaware of their rights.

Chetan told me, and is at pains in the book to say that he wasn’t badly treated. No beatings, no feared sexual attacks. By and large, despite being so different from nearly all the prisoners, the latter treated him well, and the prison staff were as reasonable as they are capable of being. His fear and bewilderment as he is arrested and processed and slung into jail is powerful stuff, and I especially enjoyed his description of the first section of the prison where he is housed, with a makeshift temple at one end and a stinky loo at the other. His initiation into prison life and prison hierarchy is fascinating, as he learns about the economics of being in jail. Anything and everything is available.  For a price. Better food, drugs, alcohol, mobile phone – if you have the money outside, you can procure these luxuries inside.

The police and the prison authorities play their part in this economy, skimming off a percentage of everything that is legally brought into the prison, and one imagines, they earn a hefty cut for allowing the illegal stuff in – the drugs, booze, mobile phones.

Mr. Mahajan is a serious runner (remember, I mentioned at the outset that I had read his FB post in connection with the half marathon) and once his family delivers his running shoes to jail, running is one of the ways he keeps fit and stays sane and focused. In the early days, his focus is on keeping up his training for the Mumbai marathon, but as December rolls into January, and it becomes clear that he will not be at the marathon starting line with his beloved wife and fellow runner Vandita, he still continues to run –  in order to think, and to clear his head. His running for choice intrigues his fellow prisoners, and there is speculation that he is a commando. Why else would he run, when he could loll around sleeping?

This book is fascinating because it gives us an insight into a world – please God – that we will never encounter. And that is precisely why “The Bad Boys of Bokaro Jail” is such a compelling read, because Mr. Mahajan is a PLU. A Person Like Us.  Urban, flawless English, educated, foreign MBA, children, dogs, running – just like any of us…And being imprisoned was as alien and frightening to him as it would be to any of his us.  Without any warning, he is thrust into a world for which he has absolutely no preparation.

His observations on the corruption within the prison system and the sheer waste of the lives of the under trials makes for sobering reading. He laments the fact that these men are taught nothing whilst they are in jail. No skills, no education, nothing. They lie around, sleeping and playing cards, and some of them get religious, but whenever they leave Bokaro Jail they will be as ill educated. untrained, unskilled, unreformed as the day they were arrested.. And, one imagines, as vulnerable and ripe for re-arrest. 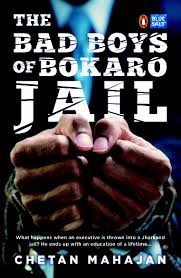 If you would like to read “The Bad Boys of Bokaro Jail” simply click on one of the links below and order :

In support of Amnesty’s efforts to help under trials. What else? 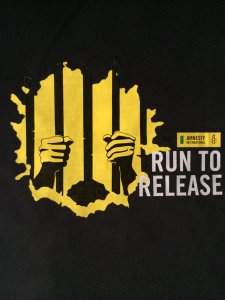 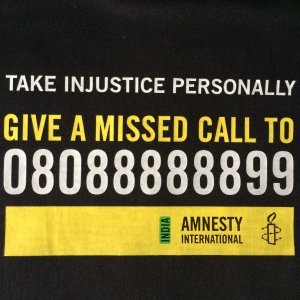