This is the first ever Marian Keyes I’ve read, which is a startling omission, right?

Fortunately, out running recently, I was listening to a BBC podcast called Fortunately (no, really) & Ms Keyes was being interviewed, and I was instantly sold.

The novel opens with an ill-judged remark by Cara, one of the sisters-in-law, and the whole family facade of happiness and affection starts to unravel. But – and here’s the “but” – we have to go back into recent family history to put the unravelling in context.

Ms Keyes cleverly builds up to a dénouement that we already know about. But then, of course, with the power of hindsight, we see things in a very different light.

The Casey family spends a lot of time together, sharing meals in Dublin, holidaying and partying, all of this bonhomie largely driven by Jessie, who loves the whole concept of happy families. As we travel through the months, watching the Caseys work and love and fight and party and eat and drink, the chaos and noise and tensions of family life are brilliantly captured.

Ms Keyes touches on some very important issues, about obsession and secrets, about denial and the need to change – to grow up. She writes with such empathy and obvious affection for her characters, that we, the readers, are immediately predisposed to like (most of) them.

Personal favourites are Johnny & Jessie’s delightfully articulate & precocious young children, who have some of the best lines in the book.

By the final chapters, I was deliberately slowing down my reading speed, because I didn’t want the novel to end.

Am officially a fan of Ms Keyes – a little late to the party, agreed, but better late than never.

The novel has just been published, in early February 2020, and you can order it right now!

How is it possible that this stunning novel eluded me for 2 years?

The book opens with a bang:

“I expected more of a reaction the first time I hit her.”

And from that sentence on, we start unravelling the man behind the public persona of handsome, urbane, successful Oliver Ryan.

The format of the book, telling the story mainly in flashback, and always from a different person’s perspective, is initially a little unsettling.  For the first few chapters, until the characters all settled into place, I had to keep double checking who was now speaking, but after a while, as the story proceeds, the cleverness (and the consummate skill) of hearing all these different voices, from different time frames, and seeing different perspectives and views add to the mystery.

“Unravelling Oliver” is a psychological thriller of note.

Oliver is a man who has just beaten his wife into a coma in the opening moments of the book.  He is a man with many secrets.  And yet, such is the skill of Ms Nugent’s spare prose, that there are moments when we feel genuinely sorry for this manipulative man.

For make no mistake, Oliver manipulates people shamelessly, from his earliest days of getting to know women in his student days in early 1970s Dublin:

“I have learned over the years how to charm them.  It’s not too hard if you are handsome and can appear to be clever with a dry wit. Then, gradually, begin to take an interest, as if she is a specimen in a laboratory.  Poke her a bit with a long stick while keeping your distance.  Ignore her for long periods to see how she reacts and then give her a good shake.  It almost always works.”

There are so many layers to the story, and as you the reader, peel back each new layer, the story gets progressively deeper and more mysterious.  With hindsight, you realise that echoes and precursors of the truth behind Oliver are scattered throughout the book.

Here, for example, where Véronique talks about her father, a man who suffered much at the hands of the Gestapo:

“He had told nobody and, despite his heroics, he felt nothing but shame.  I think it an honourable thing not to visit your horror upon those that you love, but I suspect that the pain of keeping it inside must also cause a lesion to the soul.”

With hindsight, we realise that these words – well, some of them – could apply equally to Oliver.  Oliver is not heroic, but he does have secrets that he will not and cannot share.

This is a story with dark tragedy at its centre, but yet there are moments of pure beauty, too.

When you read this toddler’s reactions to a story being told to him, it is such a joyous vignette:

“As Monsieur began to tell the story, I watched the boy’s face as he perched on his papi’s knee.  He was transfixed by the tale of a happy young prince of a fantastical land and would exclaim in the middle of the telling, would hide his eyes at the arrival of the bad witch, and clap his hands in excitement at our hero’s escape in the end.”

Ireland per se isn’t a character as such in the book, but the social situation and the mores of 1970s Dublin, are a leitmotiv running through the book, influencing the decisions and behaviour of the characters.

For example, the parlous state of Irish food in the 1970s comes in for gentle criticism, when Michael spends a summer in France:

“Ireland in those days was a gastronomic wilderness.  Parsley sauce was considered the height of sophistication.  Here, I learned that boiling was not the only way to teat a vegetable…and that garlic existed.” 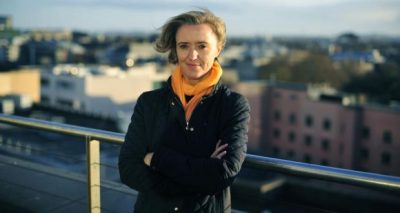 If you would like to buy the book after reading this review, here you go.

Couldn’t be easier. Just click on the link, and yes, of course, you know the rest…

Yes, indeed, I am still very immersed in the world of the master Israeli spy and assassin Gabriel Allon, and, as ever, am in awe of the amazingly topical plots and their totally unpredictable twists and turns, in the hands of the master, Daniel Silva.

Gabriel Allon and his world have been my non-stop summer reading and to my horror, I have only one book in the series left to read, and am already going into depression at the thought.  I started out in the early days of our brutal Delhi summer with Book 1, and have read them all, in order, finishing the excellent “The English Spy” just now, on a hot September afternoon here in Delhi.

I said just now that the plots are topical.  They are, of course. That goes without saying.  But Mr. Silva seems to be prescient, too, and it is this uncanny ability to have his pulse not only on the contemporary world scene but also almost see into the future, that makes his books so riveting.

“The English Spy” sees Gabriel Allon at work in Ireland, as he tries to defeat his old nemesis from earlier novels…but I really can’t tell you much more without being a complete spoil sport, so I won’t.

One of the leitmotifs that run through this totally absorbing and clever series is that of art.  Jewish Gabriel is an art restorer of world renown, one of the world’s top restorers of Christian art, often undertaking commissions directly for the Vatican and for the Catholic churches of his beloved Venice.  This unlikely pairing of violence and art, of Judaism and Catholicism, of killing and healing, is just one of the clever devices Mr. Silva uses to weave stories that draw you into them on so many different levels.

Gabriel is a hero like no other, one of fiction’s most decent, honourable men. He is modest, an Israeli who is not in the least bit religious.  A man who loves Europe and the world of churches and art and history.  A man who adores his drop-dead gorgeous wife, and who cherishes his first wife…oh dear, if anyone is reading this and doesn’t know the earlier books, I do hope I’m not spoiling things for you…

Gabriel is also, yet another contradiction in his psyche, a killer who has great compassion, as illustrated in his reaction when he sees a victim of a bomb attack: 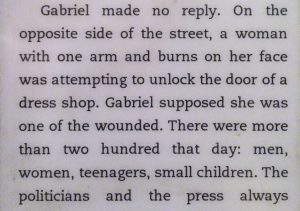 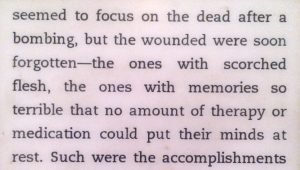 Nearly all of the major characters who form Gabriel’s world make an appearance in the novel, including the wonderful Ari Shamron, who assumes almost Biblical stature in this description: 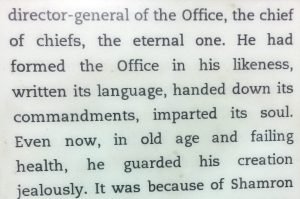 Sad to say, Israel and Israelis are often not the world’s favourite people, and so it is refreshing to be treated to the total decency and honesty and probity of Gabriel and his team.  Speaking personally, here in India, we usually meet the aggressive young Israelis who flock to places like Ladakh and Himachal, and are, sadly, very often rude and unfriendly.  Huge generalisation, I know, I know, but there were a couple of bruising encounters with hard-eyed unsmiling Israelis in Leh last time I was there.  Sad.

So, hopefully without sounding too naive, to immerse oneself in the world of Gabriel Allon, is to restore one’s faith in a country and its people.  Everyone in Gabriel’s ambit is passionate about Israel, but without being overtly religious.  The love for their country shines through, as does their commitment to making sure the world does not forget the horrors of the Holocaust.  The sights and sounds and light of Israel, the food and the wine and the sunsets, the dangers and the fear and the constant threats are just one of the many joys of these books.  And, as I said, they restore one’s view of the country and its people.