Having developed a bit of an infatuation with Inspector Samuel Tay, right from the moment I encountered him in “The Ambassador’s Wife”, I am happy to announce that he is still every bit my hero/anti-hero in the second of what one hopes will be an endless series of crime whodunnits.

Just like the first Inspector Tay novel, “The Umbrella Man” starts out with a bang, plunging the reader straight into the action. This time, however, the bang isn’t just  a metaphor.  Singapore explodes, as a series of bombs rips the heart out of Orchard Road.  The descriptions of the terror and destruction of one of the world’s major shopping streets is chilling. 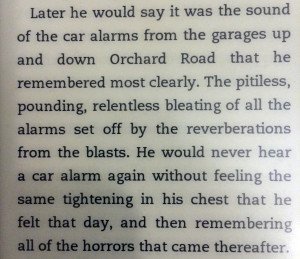 Sometimes, where you are physically when you read a book, or write down your thoughts (like here, in this review) does impact you.  So the fact that I am writing this while my daughter tells me from her carphone that there are bomb threats in Delhi, as she drives home through lunatic traffic, only made these scenes of the book even more frightening.

Mr. Needham skilfully weaves fact and fiction together, putting his fictional characters in real life Singaporean locations.  When he talks of  Ngee Ann City, one knows exactly where the drama is taking place.  The corner of Scott and Orchard Road, and the poor Marriott hotel, which featured so unflatteringly in the opening scene of “The Ambassador’s Wife”, bear the brunt of the explosions.  But who would do this?  Who would attack Singapore?  What had this tiny country done to “deserve” such an attack?

The heart is ripped out of the tiny island state, and Inspector Tay is eager to be part of the team investigating this unprecedented horror.  But his previous run in with the Americans in “The Ambassador’s Wife” means that he is off the team.  The Americans bring pressure to bear and the Singaporeans bow to them, and Inspector Tay of the CID is sidelined.  And is furious.

Never a big fan of the Americans at the best of times, this situation only inflames his temper and Grumpy-Old-Man-ism: 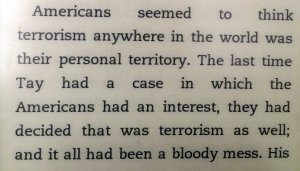 He sulks, he mooches around, his poor Sergeant bears the brunt of his temper : 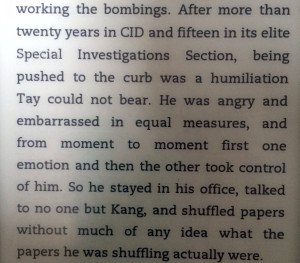 And of course he thinks and smokes and thinks some more and smokes a lot more and…but I am not going to spoil the plot, never fear.

Themes that began in the first book are continued here –  his dislike for the Americans for example.  His love of smoking, which is such a no-no in Singapore that he takes a positive pleasure in smoking wherever and whenever he can.  It is a testimony to Mr. Needham’s writing and to Inspector Tay’s brilliantly grumpy nature, that even though I hate smoking, I secretly cheer each time Sam lights up where he isn’t supposed to, or drops a butt where is is forbidden. 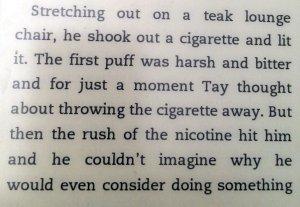 And it is this instinctive bridling against authority that leads to one of the dilemmas/controversies/call it what you will/ surrounding this book.

Basically, the powers that be in Singapore were a tad under-whelmed by the portrayal of their country in Mr. Needham’s first Inspector Tay book, and so this second novel was never published there.  Here, read the author’s own words on the subject –  he explains it way better.

Mr. Needham clearly knows Singapore and Singaporeans in great depth, and is not shy about speaking his mind.  Well, Inspector Tay’s mind : 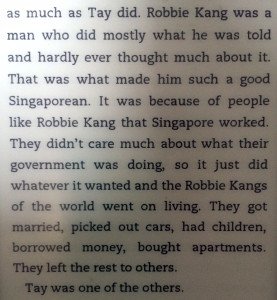 Sam Tay is way up there with my favourite literary men.

And I can’t wait for the next book.

Enthusiastically recommended, and if you feel so inlined, you can order the book right now, by clicking on one of the links below: