This slim book, winner of the Prix Goncourt, and translated from French by Polly McLean, is extraordinary on every level.  It is poetic, lyrical, moving, crude, tragic, sometimes funny in an earthy way, and absolutely engrossing.

The plot is simple, the action confined to one room, the characters very few, and as a result there is hardly any dialogue, just a long, slowly expanding monologue by the unnamed woman.

“The Patience Stone” is almost Beckett-like in its sparing emptiness  –  and interestingly Samuel Beckett wrote in French, a foreign language, as did Atiq Rahimi, an Afghan living between Paris and Kabul.

The plot line is simple in the extreme.  A woman tends her injured husband, who has been shot in the neck. He is comatose but breathing.  We never learn their names, nor those of their two little girls who make a happy, noisy but brief appearance in the story.

We are not even sure where the story takes place, right from the title page :

As she tends her husband who lies there, eyes unseeing, not moving, not eating, just breathing regularly, the woman starts by speaking briefly to him, and the accompanying narrative is brief and staccato-like.

Gradually the woman talks more and more to her inert husband, a man she hardly knows, even after 10 years of what would seem to have been a loveless marriage.  The only person in her husband’s family who seemed to care for her was her late father-in-law.  Her brothers-in-law spy on her, ogle her, and abandon her, and their brother, when they most need help. 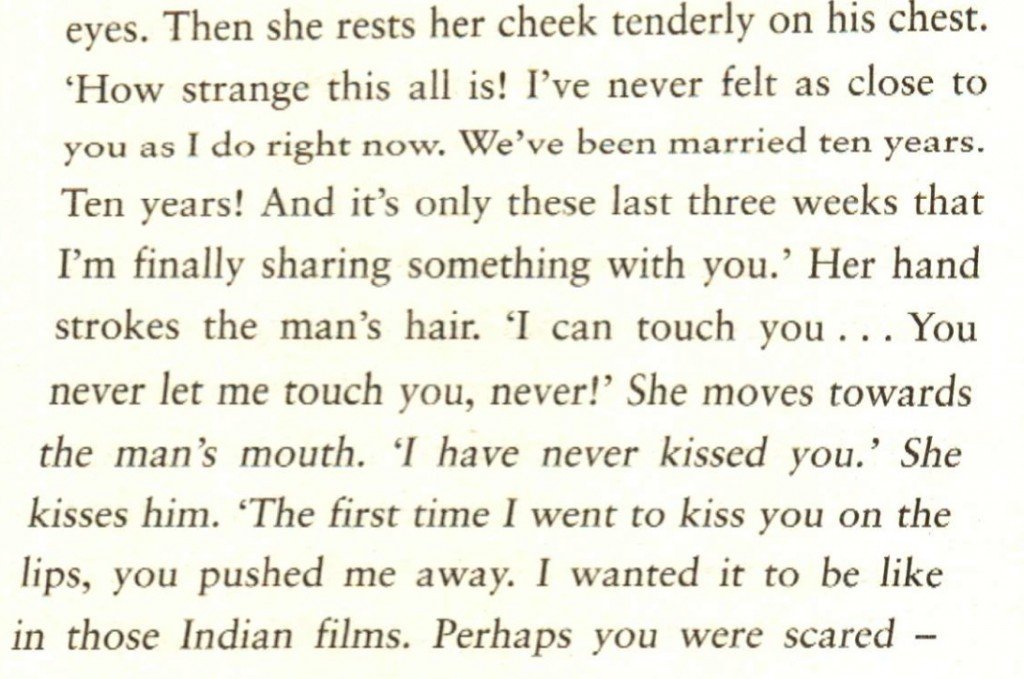 The days follow a similar pattern – the woman cleans her inert husband, gives him a drip, puts eye drops into his unseeing eyes, and on the rare occasions when she leaves the room, we never follow her into the streets.

War rages on outside, in the street, in the courtyard of the shelled house next to her, but we never see it.  We hear it.  We hear the explosions, we feel the tremors, but for the woman, as every other person caught up in war, life  – such as it is –  has to go on.  So she sweeps the floor, and talks to her husband, and prays, and reads the Koran.

The brief intrusion of the reality of war into her life takes place when she is not there, having gone to sleep at an aunt’s house with her 2 little girls.  Taliban fighters break into the room and ransack it, stealing whatever meagre possessions they have – the comatose man’s watch and wedding ring, and his Koran.  It is a brief shocking moment, an ugly flip-side of the eruption of the man’s daughters into this room.

As the woman talks, she gradually confides in her husband.  She talks of her fears about being married off to an unknown stranger, of her misery in her in-laws’ home.  She talks of her childhood.  She rails against the hypocrisy of war, and the cruelty of his family.  She reproaches her husband for not loving her or caring for her, and she hates the futile war that has made him into what he now is.

Her language and her stories get earthier, and cruder, and more graphic, and searingly truthful as the days unfold.  She curses and swears and tells her unresponsive husband the fears and drams and nightmares of her innermost soul : 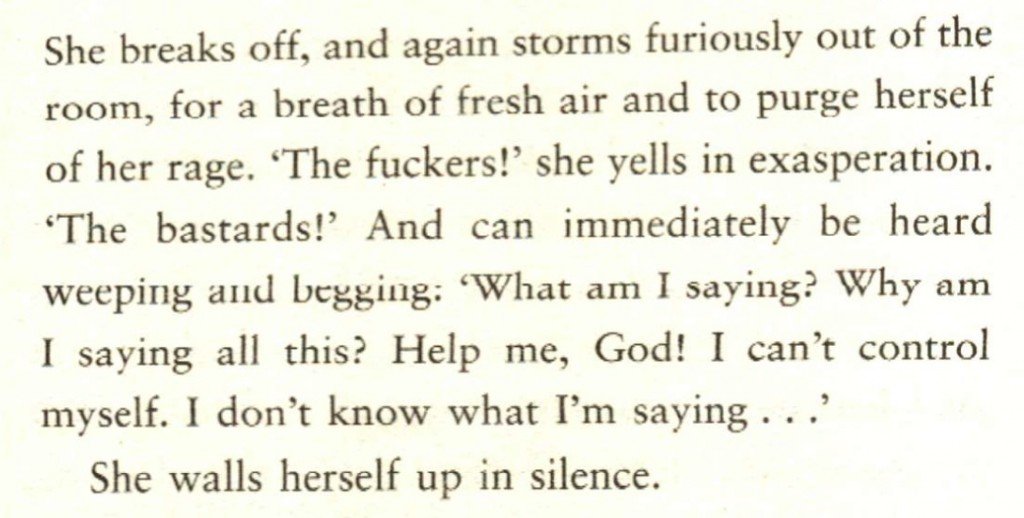 The book is beautifully written, in sparse but such moving prose, that we come to know every inch of that room in detail, and are every bit as fearful of the war and violence raging outside as the woman, as her deranged neighbour, as the stammering boy.

If ever the world needed an ode to the futility of war, to the brutal reality of its aftermath, to the tragedy that is the lot of Afghan women, and to the hypocrisy of blind adherence to religion, “The Patience Stone” is that ode.

If you want to buy the book, simply click on the link below :

This slim, charming novel about one of the darkest periods in recent Chinese history, the Cultural Revolution, manages to combine ugliness and brutishness with a life-saving thread of hope and young love and dreams.

It is 1971, and 2 young men, teenaged sons of then-reviled intellectuals, are sent off to be re-educated, in a remote corner of China.  Their new home, a dirt-poor village, is dominated by the poetically named “Phoenix of the Sky”.  In other words a forbidding slightly terrifying mountain, whose presence and moods dominate the novel.

The 2 youngsters survive in the village.

Their smuggled-in violin provides some moments of relief from the otherwise soul-destroying manual labour to which they are subjected.  When they chance upon a hidden trunk, filled with books –  books, forbidden books – of translations of 19th century French classics, they grasp at the chance to read, after months of privation.

Books and stories and weaving happiness through words and music is the leitmotiv of this book.  Luo (the narrator’s friend) is a natural story-teller, and once the trust of the suspicious village headman has been won, the 2 young men are occasionally dispatched to the neighbouring small town of Yong Jing to watch whatever film is showing.  They then return, and tell the story to the villagers over many sessions.

This power to tell stories wins Luo the heart of the Little Seamstress, the daughter of an itinerant tailor.  She is far and away the prettiest girl on the mountain, and Luo endures terrifying walks up and down the mountain to court her.

He reads to her, tells her stories, all in an attempt to “better” her, and their love develops under the wistful eye of the narrator and the spying eye of an old miller.

The end of the novel is dramatic and sad.

The Little Seamstress walks –  at times literally runs –  down the mountain, out of the book, and out of their lives.

And a heart-broken, drunken Luo burns the books that had kindled their love.

Charming, full of descriptions that bring to life the damp, cold, poor countryside of Mao’s Revolutionary China, “Balzac and the Little Chinese Seamstress” is published by Vintage Books.

The novel was originally published in French in 2000 and the English translation in 2001.  The paperback costs £7.99

If you would like to buy the book now, just click on any of the links below :