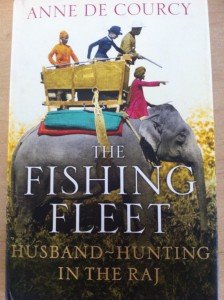 Anne de Courcy’s book is a delightful account of that well-known colonial sport, husband-hunting in India.

In a book that is well-written, informative, poignant and often times sad, Ms de Courcy tells us some of the stories of generations of young British women who went out to India to marry.  Or not marry, as the case may be.

During the height of British colonial rule, there were very many more (British) men than there were (British) women in India.  Generations of young men went out to India in search of adventure, of a prestigious career, and also in search of money (though that was often less of a motivator than prestige and a sense of duty, it must be said).

And generations of young women subsequently went out to India, in search of their own version of a career, i.e. a husband.

The British colonial authorities had strict rules on the age at which its servants could marry, and affairs, let alone marriage with Indian women, were severely frowned upon, and so when the ships arrived in India, with their precious cargoes of carefully chaperoned unmarried young women, there was something of a feeding frenzy.  The prize was a bride.  Or a husband, depending which way you look at it.

Through letters and diaries, and accompanied by many glorious old black and white photographs, the adventures, loves and lives of these intrepid young women are told.  They were young, ready to be romanced, and amazingly resilient. Some girls married and settled in cities, but some fell in love with planters or military men in far-flung corners of the country, so off they went to live lives off isolation, adventure and – seen from our cosseted perspective – often downright hardship.

Most of these fishing fleet girls loved their husbands, their lives and loved India.  The biggest sadness in their lives usually centred around their children.  In the early days, babies died so tragically easily, in the unhealthy climate, and lacking as they did medical facilities in the “mofussil” or countryside.

Those children who survived spent their early years cossetted and pampered, until that dreadful day when they were shipped back Home to school.  These are the saddest moments of this lovely book.  Little children are torn from their parents and the sunny, colourful, cherishing country of their birth to be sent away for years to a cold, grey, unfamiliar place called Home.  Except that home is India.

Of course, many children of the fishing fleet couldn’t wait for their miserable English school days to be over, so they could head straight back Home, and thus the long love story with India continued.

A happy, upbeat read, which certainly made this Indian resident slightly ashamed of herself for her occasional moans about Delhi power cuts or poor internet connections.  Most un-fishing-fleet-y.

If, after reading this review, you wish to buy the book, it couldn’t be simpler.  Simply click on the link below :

Does a reviewer have a moral obligation to finish a book ?

If so, then this review must carry a caveat.  Half way through, mired down by too much information, and  too heavy a writing style, this reviewer abandoned “Besieged”.

The writer has done a hugely impressive job of tracking down and translating hitherto unseen papers from the First Indian War of Independence/Indian Mutiny of 1857.  He has read, translated, catalogued and shared with his reader thousands of letters and fragments of correspondence written by the many people caught up on the side-lines of the epic struggle of the colonial British for domination in India.

There are requests for money for troops, complaints from the very same troops about unpaid wages.  There are requistion orders, legal hassles, reports of blocked drains – no detail of the minutiae of Delhi life in the turbulent days of 1857 is too small to be excluded.

Wherein lies one of the flaws of this impressive scholarly work.  There is almost too much information, and since it is arranged by theme, after a while it gets – sad to say – a wee bit “same -y”.

It is all to easy to be an armchair expert, but this body of material is just crying out to be a novel.

The clichéd “cast of thousands” is already assembled here – administrators, prostitutes, coolies, butchers, the King, beggars, and the delightfully monnikered “loiterers”.  British, Hindu, Sikh, Muslim – all these voices are present, clamouring for attention.

Free all these grumbling, loud, confrontational voices from their strict thematically arranged categories. Jumble them all up. And let the noisy, chaotic story of life in Delhi, on the sidelines of history, emerge.  That, in this reviewer’s opinion, will make a truly marvellous book.

Besieged Voices from Delhi 1857 by Mahmood Farooqui is published by Penguin Viking.  Published in 2010.

The hardback sells in India for Rs 699.