Daniel Silva’s latest book in the brilliant Gabriel Allon series takes up where “The Black Widow” left off, though you absolutely do not have to have read the former to enjoy the later.

Gabriel, the thoroughly likeable, decent, honourable man who heads up the Israeli Secret Service has unfinished business with one of the most dangerous men on the planet, Saladin, whose network of terror spreads death and destruction all over the world.  The novel opens with a vicious, well planned attack on London, and from there it is a matter of racing against time to find Saladin before he strikes again.

Because strike he will. 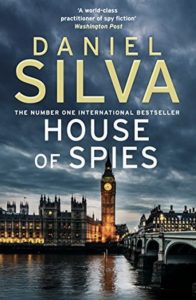 With painstaking investigation, one loose thread in Saladin’s careful plot is discovered, unpicked and the combined brains and resources of the French, British, American and Israeli intelligence communities work frantically to locate the man who dispenses death with impunity.

What is striking about this book is its bang-up-to-date-ness.

At times, you wonder if Mr, Silva isn’t writing about actual events, so contemporary and realistic are they.

It is a sad reflection of our times that the line between fact and fiction is so impermeable, when it comes to the war on terror.

The realistic contemporary plot makes this book even more nail-biting than Mr. Silva’s earlier books, each one of which is a study in keeping readers on the edge of their seats.

Though there are many familiar characters in “House of Spies” there is less personal, family detail in this book, less of the daily life of Gabriel and Chiara in Jerusalem that we have come to enjoy in the books.  The focus is solidly on Gabriel and his team, as they plot and plan their way through drug dealers and arms dealers and terrorists in a chase that takes us through Marseilles, Casablanca, and London.

A gripping read, “House of Spies” seems more intense and a shade darker than some of the earlier books.

There is no art, there is very little food and wine, almost as though the increased threat level from the likes of Saladin does not allow for relaxation.

We meet new characters in this book who will play pivotal roles – Jean-Luc Martel and his partner Olivia Watson.  The world of the uber rich, living a life of self-indulgent luxury on the French Riviera is laid bare for us, as the couple is drawn into the complicated trap being laid to locate the mysterious, shadowy Saladin.

Well-written, with twists and turns right up until the final page, this is a cracker of a read.  It is contemporary, it is disturbingly realistic and it makes the reader think about the state of the world we live in.

If you would like to order the book, nothing could be simpler.

A link to Amazon: 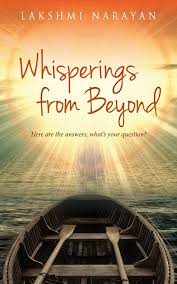 What an amazing world we live in.

You know someone for almost 30 years, and only now discover the hidden, almost-mystical side to them.

My Mumbai-based friend Lakshmi Narayan has just published her second book (& here’s a link to my review of her debut novel) and what a revelation it is.

“Whisperings from Beyond” is a collection of thoughts, precepts, call them what you will, one for each day of the year, making this a book to keep by your side and dip into regularly.

It was in her introduction to her book that I saw a side of my otherwise down-to-earth, no-nonsense friend, a side I never knew existed.  Couched in her own inimitable style, Lakshmi explains how this collection came to be:

“This collection of “thoughts” has been coming to me on a regular basis from November 2008 to present day.  Where do they ideate from? Is it my alter-ego? I’m your average aunt-next-door, averagely good, averagely bad, averagely intelligent, averagely mixed-up.  So why do these “thoughts” – so unlike my conscious concepts or leanings – bombard me?”

Now that’s the Lakshmi I know! Articulate, no nonsense, and delightfully self deprecating.

It is in this no-nonsense way of hers, that she opens her heart and shares her thoughts with us, explaining that prayer has always been important to her:

“From personal experience I can honestly say that prayer has been the single most motivating factor in my life and it has definitely moved mountains, making the impossible possible.”

The author offers us a thought – more like a short reading – for every day of the year and on opening the book, I turned straight to my birthday reading.

It is called “Accepting the unacceptable” and the final stanza of Lakshmi’s musing gave me pause for thought :

“…If we stop resisting

and go with the flow

out of the bad and

There are thoughts on topics as varied as money, value systems, resisting temptation, negativity…something for everyone, which is part of the appeal of this book.

You can dip in and out, and always find something to make you think.

Published in 2017 by Hay House, “Whisperings from Beyond” costs Rs399.

You can order it here, by clicking on the link…but, hey! You all know how to do that without any explanations from me, right?

Reading Abir Mukherjee’s “A Necessary Evil” was a fine balancing act between dying to know what happened next, and dreading the approaching end of the book.

This absolute cracker of a novel is a fine and worthy successor to Mr. Mukherjee’s first novel “A Rising Man“, and it is with great pleasure that the reader re-acquaints him/herself with Captain Sam Wyndham of the Imperial Police Force in Calcutta, his wonderful assistant Sergeant Surrender-not Banerjee, and the lovely Annie Grant, who has captured Sam’s heart, but doesn’t seem to return the compliment.

Mr. Mukherjee’s first novel took place almost entirely in Calcutta, and though the action in “A Necessary Evil” begins in the city, the heart of imperial India, in June 1920, it quickly moves to the princely state of Sambalpore in the state of Orissa. The crown prince of the state is murdered in Calcutta, in the presence of Sam and Surrender-not, and so the duo heads to his state to try and find out who murdered the flamboyant but popular young prince.  And why.

Calcutta is but a fleeting presence in this novel, though a powerful one.

Sam, a troubled man after his experiences during the First World War, sometimes heads out at night for the opium dens of Calcutta:

“At night, though, Tangra transformed itself into a hive of shebeens, street kitchens, gambling house and opium dens.  In short, it housed all the things that made living in a sweltering, crumbling metropolis of several million people worthwhile.”

Since the murder victim is from one of the semi-independent princely states that were outside British colonial jurisdiction, there is a noted reluctance on the part of the British powers-that-be to follow up on the murder, for reasons of political expediency.

Sam is a caring man, but cynical about the trappings of Empire:

“That was the things about viceroys, they might assume the mantle of demigods, but in truth, since the time of Lord Curzon, the only thing that’s really mattered to any of them is to keep the plates spinning until they can move on.  No one wants to be remembered as the man in charge when the music stooped- the man who lost India. But that wasn’t my concern.  Everyone has their own priorities.  The Viceroy’s was the avoidance of anything that might rock the ship of state; mine was getting to the truth, and I wasn’t about to give up on this case now, just because the Viceroy might deem the results unpalatable.”

The wonderful Surrender-not is an intelligent, perceptive young man who went to Harrow with the prince, speaks flawless and eloquent English, but is hopelessly tongue-tied in the presence of women.

“Of course Surrender-not wasn’t his real name…His parents had named him Surendranath: it meant king of the gods: and while I could make a fair stab at the correct Bengali pronunciation, I never could get it quite right.  He’d told me it wasn’t my fault.  He’d said the English language just didn’t possess the right consonants – it lacked a soft “d,” apparently.  According to him, the English language lacked a great many things.”

Mr. Mukherjee’s descriptions of the glittering, bejewelled pomp and circumstance of princely India are glorious, with cremations and coronations and palace intrigue and zenana politics all on dazzling display.  Despite all the trappings of princely India, from the eunuchs to elephants, from jewels to private trains, Mr. Mukherjee never falls into cliché-dom.  There is enough intrigue and danger and dislike swirling around the palaces and forts to keep Sam & Surrender-not busy, and the reader enthralled.

It would really not be nice of me to reveal much more about the plot of this thoroughly enjoyable murder mystery, so suffice it to say that the 2 policemen have to unravel a clever, complicated skein of intrigue.

There are twists and turns, there is elegance, there are moments of pure horror, there is thwarted love – all the components of a great, historical read. 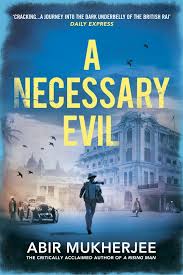 For the record, I bought the book myself, and was not asked to write this review.

Published in 2017 by Harvill Secker, you can order the book now, by clicking on the link below: 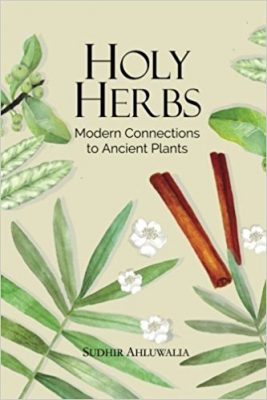 What an erudite and interesting reference book this is.

For anyone curious about the history and origins, the uses and the science of herbs and plants, Mr. Ahluwalia’s book is one to refer to.

With many years of his career spent in the Indian Forestry Service, Mr. Ahluwalia clearly has a wealth of knowledge and shares it generously.

The book was especially interesting for me, on a purely personal level, since I am a Christian and since much of the book focuses on herbs and plants and trees mentioned in the Bible, many references were familiar from childhood bible study classes.

But the author covers ancient Greece and ancient Egypt, the Indus valley, Jewish traditions, and it is this very wide ranging nature of his research that makes this such a good reference work.

I dipped in and out of the book, but always ended up reading more and more.

For example, when I received my review copy of the book, I had just returned from a trip to Oman, and so the chapter on Frankincense was of particular interest.  From there it was just one small logical step to learn about the medicinal properties of African Frankincense, and suddenly I realised that, yes, I’d heard of Boswellia as a possible treatment against cognitive decline.  One further step and I learned that India, too, has its variety of Frankincense, something I didn’t know before.

As I said, one thing leads to another in this book, a bit like pieces of a jigsaw fitting together, as you connect plants with history, and culture, and folk medicine and modern medicine.

I was sent the book by the publishers, the delightfully named Fingerprint!  (the exclamation mark is theirs, not mine, by the way)

Colour photographs would have been lovely, and definitely added to the look of the book, but even so, this is a useful book to keep on your bookshelf, and to consult.

If you would like to order the book, you can do so directly from here, using the link below: