Let me start this review by nailing my colours to the mast.

“Aarushi” is a brilliantly written, meticulously detailed, gripping piece of work, and should be read by every single person who cares about India and justice.

For this book holds up a mirror to the first two professions, revealing their flaws and defects and, in parallel, the huge moral responsibility they both bear.

And any student of journalism should be proud to take a leaf out of Mr. Sen’s book –  his research and attention to detail are meticulous, his research is thorough, unbiased and clearly presented.

Reading Avirook Sen’s extraordinary book “Aarushi” is an emotional experience in so many ways. Reliving the horror of the murder of a 13 year old girl is traumatic, even for we the readers.  For anyone who was living in India at the time – May 2008 – the memory of the gruesome murder, the arrest of the child’s father, his release, then the subsequent arrest, trial and the shocking conviction of both parents for her murder –  all those memories are still surprisingly fresh, for this was a sensational case, which had every one of us gripped.

I remember blogging about the case, willing the parents to be innocent.

But the lurid details of wife swapping in Noida, the widely circulated theory that the 13 year old was having a consensual sexual relationship with a middle aged male servant, all of this was fodder to what passes for journalism here in India.

Sorry if that sounds harsh, but there you go.

We have a hysterical TV press at the best of times, and this cocktail of sex, murder, servants, wife swapping, golf clubs, locked doors, seemingly unemotional parents (that must prove they were guilty, right? No public hysteria was suspicious, right?)…oh, it was all too good for the TV ratings.  No matter that most of it was hearsay, unproven, salacious tidbits leaked by an irresponsible investigating team.

Well, read this astonishing book, and you soon will.

In the first few pages of the book, we see the police at work.  It is a truly terrifying catalogue of incompetence, to put it mildly.  The words I would actually like to use would not make for polite reading.

Read this extract below, and pray that you never, ever, ever find yourself at the receiving end of such inept, unprofessional, insensitive “policing” : 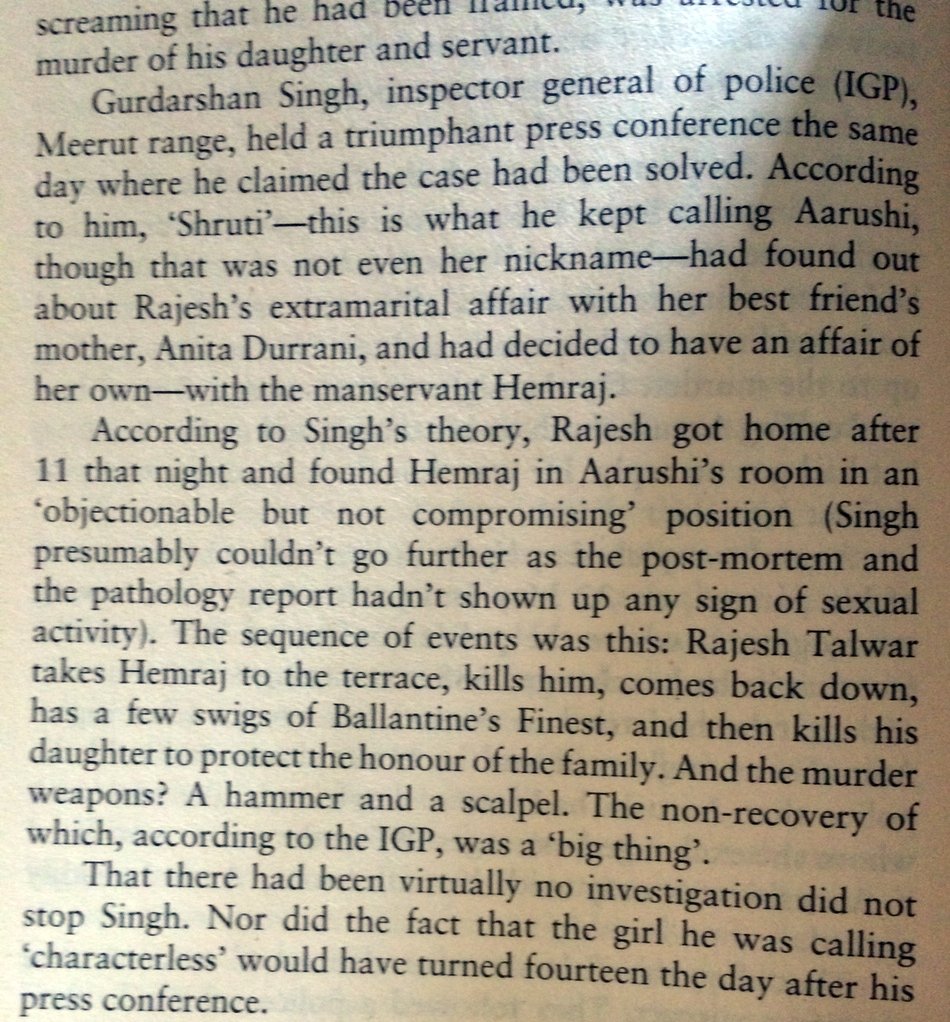 Mr. Sen writes in a clear, unbiased voice about the chaos and cacophony surrounding the trial of 2 bereaved parents, and though never taking an overt stand, you know where his sympathies lie.  With the dignified, grieving Talwars, rather than the servile, incompetent authorities. 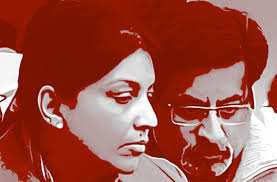 Unlike the TV anchors going after ratings (and did one of them really dip his hands in red paint to simulate blood on camera?) Mr. Sen attended all the court hearings, quietly interviewed as many of the protagonists as he could, and, in a hugely chilling end to the book, he re-visits and re-chats with the main players once the trial is over, and the Talwars are incarcerated.  Even in jail, bereaved, the Talwars remain dignified.

And if your blood hasn’t already boiled with the parade of self-serving, incompetent police, CBI and lawyers who were let loose on the Talwars, then the conclusion of this fine book will certainly make you angry.  And very, very scared for anyone fighting for justice.

The most frightening interview in the book is the one Mr. Sen has with Shyam Lal, the now retired judge who sentenced the Talwars, and promptly retired a few days after sentencing. 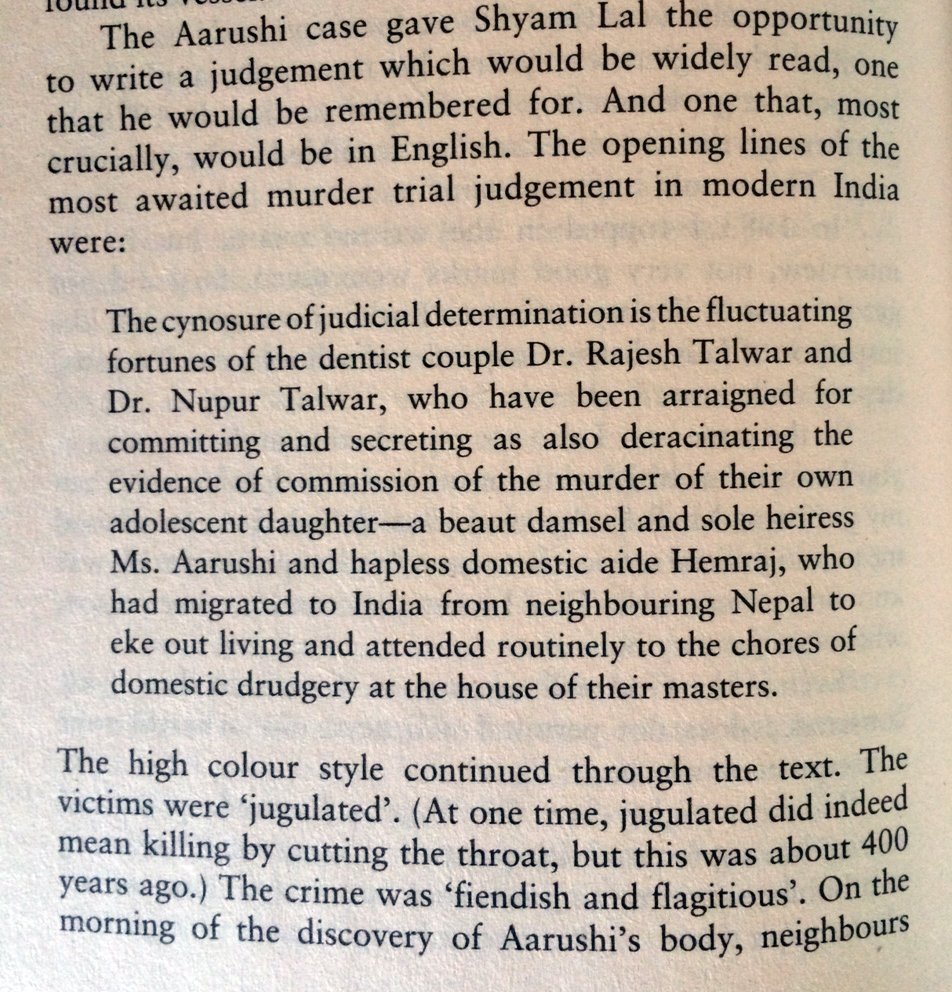 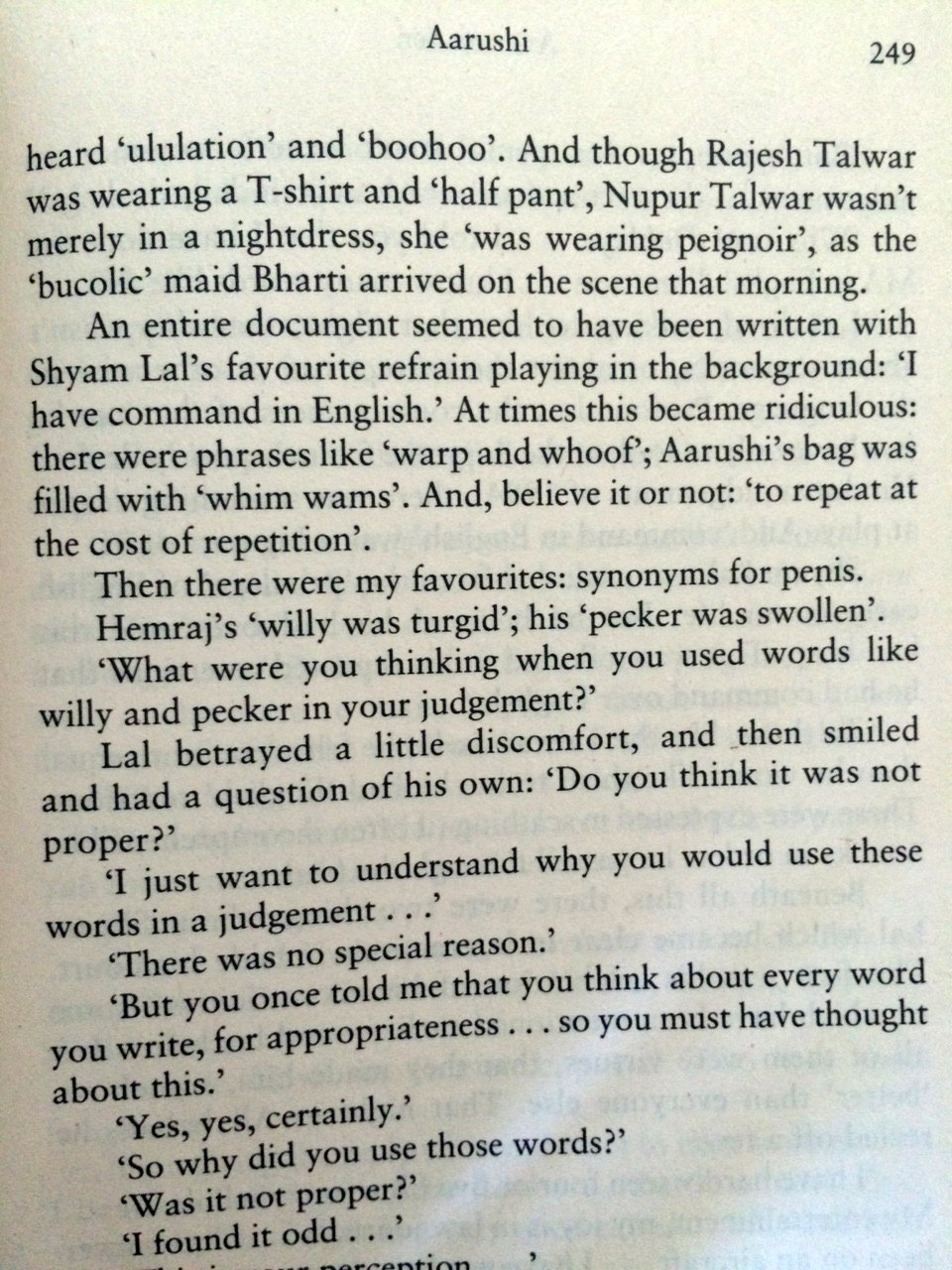 The above is straight out of the realm of buffoonery.  But to be fair, not everyone can speak and write well in English, but why the system allows such a travesty as this is mystifying.

But it is the final moments of the book that should make you sit up and make you very angry: 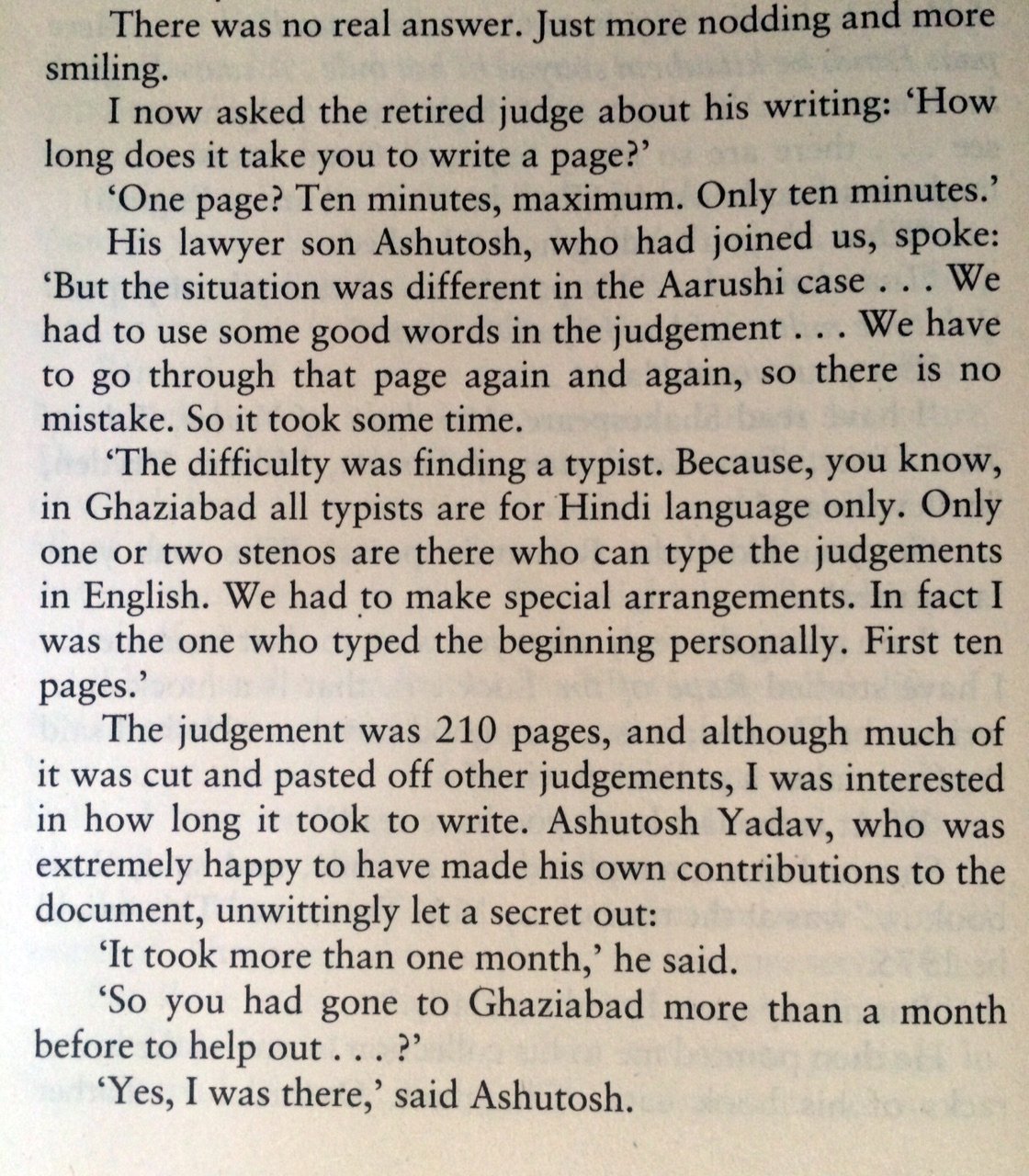 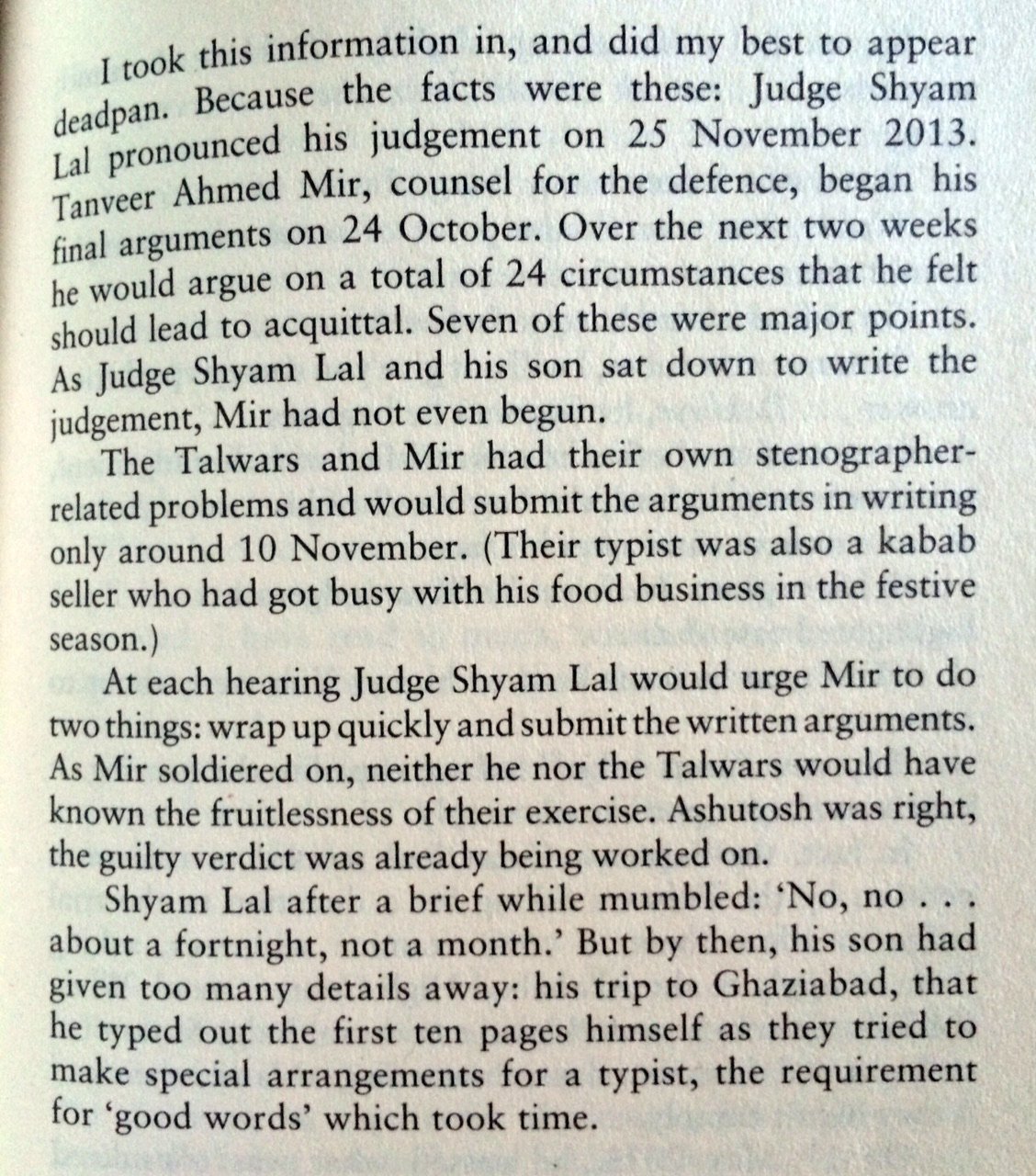 The only thing I still can’t quite comprehend, even after reading this fine book is this: why?

Why did 2 people have to bear the brunt not only of a personal tragedy of unimaginable horror, but also the full weight of a conniving, incompetent system?

Evidence was withheld, was blatantly tampered with, and yet no-one seemed to be in the least concerned.  The case of the purple pillow is so shocking that you keep wondering if you have somehow misunderstood the implications.  But no.  Evidence was tampered with.  And no-one other than the Talwars seems bothered.  Certainly not the investigative agencies.

If the Talwars had been politicians or industrial giants or CEOs or cricketers or Bollywood stars, you could (with perhaps some justification) claim such a travesty of justice to be a cover up or a vendetta – whatever was appropriate.

But these were 2 ordinary middle class people.  Professionals.  Educated.  Loving parents.  So why the massive all-encompassing travesty of justice?  It can’t surely all have been a self-serving cover-up, with everyone too scared to admit to their mistakes and failures?  So just bluff your way out and compound the situation?  Surely not?

But, terrifyingly, that seems to be the only conclusion.

If you haven’t already bought this book, then please do so now by clicking on one of the links.  You owe it to yourself.  And to the Talwars.